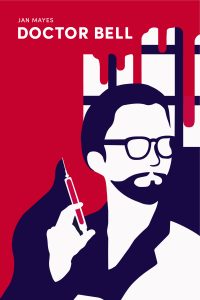 Doctor Bell is an optimistic psychopath. An optimist determined to try anything to develop a miracle cure for tinnitus. A psychopath with no medical training, morals, or HR department.

Bell’s studies promise more than shivers and fear of bathtubs, but the soft caress of terror that comes from unhinged experiments with unexpected consequences.

Join Bell and his sidekick Baldy through this book’s pages as they ignore science, safety, and setbacks while Doctor Bell attempts to find a cure and steal the title of best tinnitus researcher ever.

This book contains dark humour, violence, and coarse language. It is not appropriate for young or sensitive readers.

Every now and then, I come across research where the authors expose human subjects to dangerously loud sound levels. This violates the Helsinki Declaration on research ethics. Whether or not there is hearing recovery after the exposure ends, there is likely permanent progressive auditory health damage.

I used to write emails and contact authorities or decision makers. Nobody seemed to care. Disclaimers are used. Subjects are asked to sign informed consent releases. Journals publish findings, regardless.

It got me thinking. What is the worst thing a researcher could do to a subject in the name of a tinnitus cure?

What if they didn’t know anything more about ears than you could learn from Google?

What if their only interest was making billions in cure $ale$?

What if they were a psychopath who didn’t really care about any of their Subjects?

Study 421: Rotary is the result. I wrote it for a Halloween 50 word flash fiction event. I couldn’t stop thinking about my “doctor” and what he might be up to next. This was not the first or the last of his studies.

“I can fix you,” muttered Bell.

She struggled against the restraints. Uselessly.

He carefully selected a bit. Sizing it to her ear canal until satisfied. The drill buzz was louder than any tinnitus she had known.

“It should work…this time,” he murmured as the drill spiraled into her ear.

What a fast-paced riot of a read!
Amazon review
A vivid horror of incompetence with a Machiavellian lead.
Goodreads Review
The Dr Bell Anthology is well written and presented, with a well thought out story line. If you like a medical horror read then this one is for you.
Amazon review
Previous
Next

Tears slipped gossy down Drew’s cheeks. “But everyone has told me nothing can be done. You just have to learn to live with it. Learn to cope.”

“Nonsense!” said Dr. Bell. “Currently, I am doing a study investigating a cure for tinnitus. It will be revolutionary research. Very optimistic.”
“Can I be in it?” asked Drew.
“I am very selective about my Subjects.” He looked at her documents. Flipping through the large file. “You would have to give informed consent. Maintain total confidentiality regarding my research. Consider yourself cautioned. Legally speaking. And so on.”
“No problem.”
He nodded his head thoughtfully. “I think you might work out for it.”
Drew smiled widely. “What’s involved?”
Dr. Bell smiled back. “The most current research definitely shows that the amygdala, in the brain, and the auditory system, in the brain, are entwined. Interconnected. Fear plus hearing. All together in one package. And that’s what happens with tinnitus. Causes the fight or flight response.”
“Uh huh,” said Drew.
“And so in my current research study, I am examining the value of something completely new. Sound Desensitization. Eliminate the fight or flight response through exposure.”
“How does that work?”
“Have you ever heard of treatment to help people stop being afraid of flying?” asked Dr. Bell. “They gradually get exposed to airports and being up in the air. Avoidance is not the answer.”
Drew nodded.
He went on, “This is the same type of thing except with sound. Fight sound by incremental exposure to sound. Now, everyone talks about using pleasant sound. Calming sound. That is utter balderdash. Never cured tinnitus yet. I believe I have found a completely new type of sound that will blow tinnitus to smithereens.”
“What’s it called again?” asked Drew.
“Sound Desensitization.”
“I’ve never heard of it,” said Drew. “And I do a lot of reading and research about tinnitus. Mostly online.”
“Well, as I just told you, it is entirely new. Never been tried before.”
“What would I have to do?”
Dr. Bell leaned forward. “Listen to ten sounds. Tell me what you think of them.”
“That’s it?”
“Essentially.”
“Huh.”
“Afterwards, I would provide you with an audio file for the most desensitizing sound,” said Dr. Bell. “You would have to listen to it for six hours a day. Then move up to twelve. Then twenty-four hours. For three months. Consistently. Conscientiously. At that point…tinnitus gone.”
“It could really fix my tinnitus?” asked Drew.
Dr. Bell looked serious. “I cannot make any guarantees, of course, but if it works? The thought of it leaves me speechless.”
There was a long silence. Or as silent as it could get for Drew.
“So do you want to participate in my study?” asked Dr. Bell. “It is a once in a lifetime opportunity.”
Drew nodded. “I’ll do it.” What did she have to lose?
On the day of her appointment, Drew…[End of Excerpt]

Available in paperback and ebook at libraries and bookstores including Amazon.